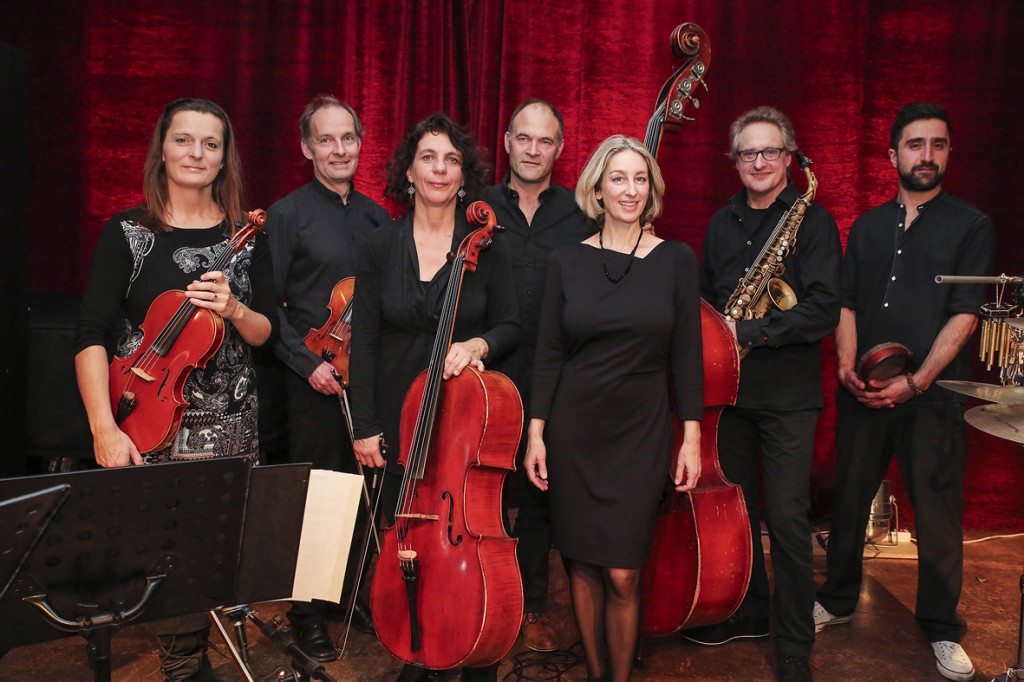 The poems of English poet Christina Rossetti (1830 – 1894) are not overly well-known in this country, yet the singer Eva Mayerhofer used them to develop her initial idea for a new musical project. Forming the congenial counterpart for the musical setting is the lyrically sensual music of the composer and saxophonist Roger Hanschel. The compositions for voice, saxophone, string trio, contrabass and percussion oscillate between chamber musical finesse and noble, refined grooves. The three prestigious, classically trained string musicians of the ensemble – Matthias Lingenfelder (Auryn Quartet), Ulrike Zavelberg (Rubin Quartet) and Martina Horejsi (Rubin Quartet / Gürzenich Orchestra) – stand for the highest virtuosity and masterful interpretation. The unusual instrumentation of the Iranian percussionist Afra Mussawisade and grounded sound of contrabassist Dietmar Fuhr form the foundation of the musical architecture in whose tonal structure the rich colorful spectrum of Roger Hanschel’s saxophone can optimally spread. Eva Mayerhofer interprets Rossetti’s emotional texts in a soulful, unpretentious and passionate manner.
Roger Hanschel’s music offers the singer the opportunity to present herself outside of the work with her own quartet in another musical light, and display new facets of her singing.

“These are the moving poems of the English poet Christina Rossetti, which create the foundation for Eva Mayerhofer’s new musical project “Life and Death”. What an undertaking to bring the Victorian art of Rossetti to life musically, whose motives are love, death and the beyond. Eva Mayerhofer is equal to this task without question. Her mature voice embraces the lyrics sensitively and expressively, sets very fine accents, and does not allow the content to perish under an overly gushing interpretation.” (1/17, Jazz-fun)

“… with this, Hanschel enwraps the lyric poetry of Rossetti in a sound world close to that of chamber music. To this Eva Mayerhofer opens up the necessary space for a journey of discovery into the poetry of that past Victorian era and the otherwise dying slumbering words of the poetess. With her own means of emotional vocal expression, Mayerhofer blows the dust aside, making Rossetti timelessly alive for present-day recorded music.” (1/17 Concerto)

„Together with Roger Hanschel, Eva Mayerhofer dedicates herself to the lyrical poetry of Christina Rossetti. In addition to Hanschel’s compositions, which are practically art songs in themselves, Eva Mayerhofer thrills her listeners with an extraordinary vocal performance. She understands how to integrate her voice into the tonal color of the instruments ingeniously, how to dissolve into this color, and how to lift herself out of this connectedness and rise like a flower in a time-lapse. In her singing, she creates a second level of meaning, which gives this great lyric the place it is due again and again. This is great, no make that maximum, artistic creation. Excellent.” (2/17, Jazzpodium)

“… the seven songs that can be heard on “Life and Death” are harmoniously arranged with chamber music finesse and refined rhythms to such an extent that they form the perfect harmony with Mayerhofer’s warm and mature voice.”
(2 – 3/17, jazzthing)

„… this way, an album was created with only seven pieces, if we see it superficially and factually, and which deals with the poetry of Rossetti. Especially the content, which – and the album title sends its regards – emphatically and not too theoretically deals with love, life and death, but also, ostensibly at least, can fulfill the demands of contemporary jazz art. The strings of Matthias Lingenfelder, Martina Horejsi, Ulrike Zavelberg and Dietmar Fuhr as well as the percussion accompaniment of Afra Mussawisade let Eva Mayerhofer’s “Life and Death” breathe deeply and vividly. They also provide constant surprises as well as moments of tension, both of which allow the lyrical basic themes of the work to plunge into a sort of side show – the magical power of music. The album also sounds like a small world-music excursion, due to the multi-layered arrangement of the strings, which also leads us back into the lyrical depths of the album’s main motif – a balancing act between seriousness and entertainment that Mayerhofer and her fellow performs masterfully, if not necessarily successfully for the mainstream. In fact, you should bring an open ear and an even more open heart to fully enjoy “Life And Death” by Eva Mayerhofer, who acts with the gentlest voice and makes a brave album that will amaze and fascinate you. And there is an appealing cover (CD), both to the eye and to the touch as well.” (2/17, Soultrain online)

“… For Eva Mayerhofer’s new, special project, Roger Hanschel composed the music to the texts with both sensitivity and deliberation. “Life is not sweet. One day it will be sweet / To shut our eyes and die,” the title says. The ensemble – with the percussionist Afra Mussawisade, the string musicians Ulrike Zavelberg, Martina Horejsi and Matthias Lingenfelder and the bass player Dietmar Fuhr – sets this up in interlacing and enthusiastic fashion. Hanschel’s saxophone and Mayerhofer’s voice give the pieces the necessary depth and create distinction. The strings and percussion instruments lend the music a slightly oriental touch, which emphasizes the heaviness of the lyrics …. Not only do the lyrics of Rossetti alone let this album become distressed and melancholy, but which at no time seems cumbersome. The voice of Eva Mayerhofer underscores and sounds as if it is tailor-made for this. All-round, she has beautifully set literature to music.” (2/17 melodiva)

“… with band shaped by strings surrounding the producer and saxophonist Roger Hanschel, the German singer has succeeded in producing a fine-sounding album, one that clothes the very special poetry of the British Christina Rossetti in exciting tones.” (2/17 Zeitungshaus Bauer)